Summer Series: How to Spend a Day in Cebu


Cha and I boarded the first Cebu-bound ferry from Tagbilaran City in Bohol. Despite time constraints, we were up to the challenge to explore the Queen City of the South for a day.

After two-hour ferry ride, we reached the port in Cebu. We wasted no time and went straight to the Tourism Office near the port to get a map of the province. Because we were pressed for time, we decided to just rent a cab (P1,500) to tour us around. With just a map in hand, we went on to tour Metro Cebu - one of the most visited provinces in the country - from 11am to 5pm.

The first thing that struck me while going around Cebu is its certain semblance to Manila. And like its counterpart in Luzon, it gives an impression that it is just a place with the accumulation of buildings and people. But at the end of our day tour, I learned that Cebu is not called Queen City of the South for nothing. Suffice it to say, a day is not enough to roam around its many historical sights. But I think Cha and I covered some of the most important ones.

Cebu lies at the very heart of the Philippines. Located to the east of Negros, to the west of Leyte and Bohol islands, Cebu Island is stretching 225 kilometers from north to south and surrounded by 167 smaller islands, which include Mactan, Bantayan, Malapascua, Olango and the Camotes Islands.

Its capital Cebu City is the oldest city in the Philippines. It is part of the Cebu Metropolitan Area together with four neighboring cities including Danao City, Lapu-Lapu City, Mandaue City and Talisay City and eight other municipalities.

Cebu is also one of the most developed provinces in the country. Its main industries include furniture making, tourism, business processing services and heavy industry. Most of the population are Roman Catholic and the main languages spoken there are Cebuano, Tagalog and English.

Here are some of the places we've visited during our six-hour stay in this metropolis.

Basilica Minore del Sto Nino (Cebu City)- Our first stop is the Basilica del Sto. Nino. This beautiful basilica houses the image of the Sto. Nino, considered the oldest religious relic in the Philippines. This relic is said to be the same image that Magellan gave to Queen Juana as a gift during the baptism of King Humabon and his wife Queen Juana on April 14, 1521. 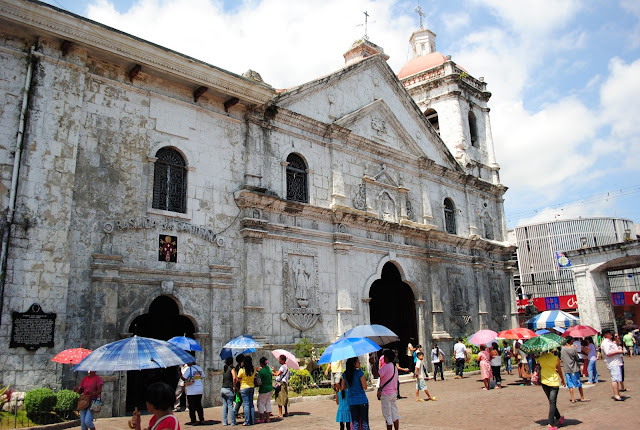 
It's not everyday that I get to wake up to a call for an interview to be featured on TV. I'll figure in a national primetime newscast for the very first time! Ok, as you can imagine, I was very ecstatic!

Although still unsure what the storyline is, I immediately said yes to Toni, a producer for GMA 7's 24 Oras.  The date, time and place where we would meet was set.

Along with my sister Carina, we met Toni and the crew at UP Diliman last Friday morning, April 12th. The shady Acacia trees at the Academic Oval provided a perfect backdrop for the interview. I thought what could be any more better than being filmed in one of my favorite spots on earth? It was a double yey!

The interview was about my backpacking Pilipinas stories, mostly about the 80 before 30 challenge and the BookSail project.  The interview was quick, fun and relaxed. I was very giddy answering the questions which apparently reflected on the final report, but I think I got my message across. :)