BookSail - Braving Philippine Seas for Literacy: The Road to and from Palumbanes Island

Ralph Christian, 6, held the book tightly in his hand. In that cramped and poorly ventilated room filled with excited bunch of grade 1 pupils, his tiny voice, reading in rhythmic patterns, was going through the pages of "Ang Alamat ng Lansones." He was unmindful of the tiny other voices trying to rival that of his. He was pensively reading,  that with a total youthful intent.

I was also in that classroom with Ralph Christian along with seven other volunteers who came mostly from Manila. We were all ears at his reading.

It was a special day for him and the rest of the kids and teachers in Palumbanes Island Elementary School. The books they have been waiting for months has finally arrived. Although it was a Saturday, the attendance in the school was swell. We could see the eagerness in the eyes of the kids. And the whole BookSail volunteers were as enthusiastic as they were.


When I started with backpacking Pilipinas three years ago, collecting travel souvenirs was not in my must-do list. I'd randomly buy some keepsakes - like trinkets for my office mates or t-shirt for my siblings - but I wasn't too obsessed hoarding something for myself. I'm not overjoyed by the idea of having to haggle to find budget-friendly shirts or having to wade through flock of tourists going on a madness sale over tiny cute souvenirs (like the busy shops in Baguio and Boracay). Oh well, I guess I was a bit impatient back then.

It was only two years ago when I thought of how it would be nice to bring home small memento of each place I go to. I realized how privileged I am to have actually been to those off- the-beaten roads and that it may take a long time for me to return. It thought it would be necessary to find something to remember the place by.

Being that I keep myself light when on the road, I decided to just limit my collection to some tiny and useful treasures. When buying a souvenir, I also factor in the advocacy to promote local and indigenous products. So that being said, let's keep on supporting local products!

Here are some of my favorites:

I once brought home a souvenir magnet and put it on my clean and clear ref door. It looked proud to have finally found a place in my home. As I stared on it, I decided on something that I'll do for the rest of my travel years. I'll fill that empty space with the beautiful ref magnets from the Philippines and beyond. Those pretty pictures will help me remember the experiences from each spot I've been too.


I keep a list of "Must-Visit Places in Mindanao" since I started my 80 before 30 challenge, but I decided to put off exploring this region until Luzon and Visayas provinces are all done. Now that I'm on my final leg of the backpacking challenge, it's such an amazing feeling to be finally ticking off some of my dream destinations in Mindanao, one beautiful place at a time.

The province of Surigao del Sur has recently been included in the tourist trail because of the natural wonders that are lying still and almost hidden in its off-the-beaten mountains. Two remarkable sights that Anchi and I have seen lately are Hinatuan's Enchanted River and Bislig City's Tinuy-an Falls.

When a Facebook friend posted a picture of a "river" with a disclaimer that he didn't photoshop or post-process the result, I was like "Are you kidding me?! The colors are so vibrant to be true!" I did my own research, and found the results all the same. Indeed, the hues are stunning. Then I decided that I should see that place myself, at all cost!

And we finally met last June. It was a short, but still a magical encounter. I was literally river-struck. :)

We arrived at Enchanted River after an agonizing five hour ride from Davao City to Surigao del Sur ( The depressing van ride deserves another blog post, but I'll not get into details here to not spoil anything).

From Mangagoy, Bislig City, Surigao del Sur, we hired a habal-habal (good for 3) to take us to Enchanted River and Tinuy-an falls. The driver asked for P1,000, which I thought at first was a rip off but not up until I realized how far the destinations were. It was already late in the afternoon so we decided to cave in. Later I realized the fare was fair enough.

Our first stop was Enchanted River.


Aside from being home to the prime surfing spot in Northern Luzon, La Union also prides with a number of restaurants that will definitely feed your appetite after hours of being out in the sea riding the waves. Whether choose to surf or simply lounge in the fine gray sand of San Juan, La Union, you'll be in for a tummy treat  as you go for a gastronomic trip from high-end to humble restaurants.

In my recent trip to La Union with fellow travel bloggers, I had the chance to visit some of the restaurants around, thanks to Lois and Raf  of the The Circle Hostel.

Located right along the main highway at Urbiztondo, San Juan, dining here is definitely a treat especially those up for tasty local dishes. Their kare-kare is a must-try! I love it! 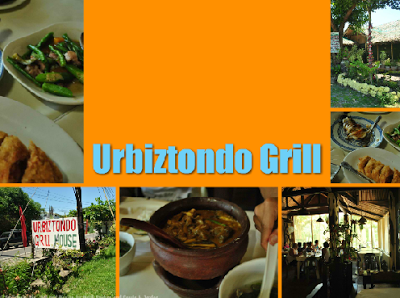 
Jack Johnson was beating his usual mellow song in the car stereo as we were speeding off smoothly along the panoramic North Luzon Expressway. It was a beautiful Saturday morning of June, and I was off to La Union for a yoga and surf weekend with 10 fellow travel bloggers.

After nearly six hours rolling off from Manila, we reached our destination. San Juan, a second class municipality in the province of La Union is considered to be the Surfing Capital of Northern Philippines. It is known as a mecca for intermediate surfers, mostly coming from Manila and nearby provinces, especially during its two surfing seasons -- July to October and November to March.

It was my second time in San Juan and I was giddy for a repeat of my more-than-pleasant trip there last January. The beach may have baby waves compared to other surfing spots in the country, but I'll always remember the good vibes and friendly people I've met there. I was excited to surf, do a bit of yoga and relax!

Read more »
Posted by Che | BackpackingPilipinas at 1:16 AM 15 comments: