Peeking through the Manila Metropolitan Theater 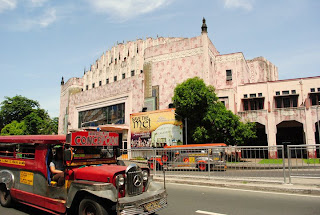 Whenever I pass by Lawton area in Manila, I can’t help but imagine some crazy-scary scenes inside the Manila Metropolitan Theater. I would visualize lovely women dolled up to catch a gala show. The long lines of vintage cars passing in front its intricately-designed façade. The red curtain and the red carpet. All glamorous. But, when the reality dawns on me that I’m looking at a severely dilapidated infrastructure, my mind would easily shift to scary thoughts. Now, there would be ghosts hovering the entire place. And the lights would dim.

Just last Sunday, June 20, along with about 130 participants, I had the chance to enter this famous art deco building designed by the Filipino architect Juan M. de Guzman Arellano. The free tour was organized by the Filipinas Stamp Collectors' Club. We seized the place not for ghost hunting but to just explore and somehow get a glimpse of this long forgotten landmark. 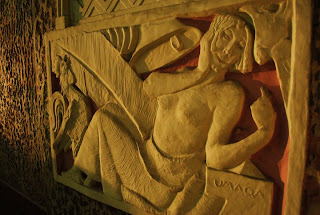 As soon as we entered, I was amazed by the intricate designs inside. The patterns, textures and colors. While exploring its halls, I kept on imagining my fave movies Phantom of the Opera and Moulin Rouge. Goosebumps. But it's still very apparent that things were really good during its glorious days. It made me feel bad that something as grand as this place was left rotten by the government. It’s a pity.

But when we went there, we were told that the Government of Manila decided to restore the theater. Good. I hope to see the MET back to its heydays. =)

Posted by Che | BackpackingPilipinas at 10:18 AM