I was feeling grumpy days before our trip. I wasn’t my usual jumpy and excited self. But then, the idea that I’d finally stop wondering what it feels to be inside the Underground River gave me some comforting thoughts. I. Must. See. It.

Cha and Kidd kept me company. It was another fun-filled 3-day trip with these two ladies. I find it amazing to be with people whom I can share travel stories with, who would cheer me up when I’m all eaten up with fear when I was about to do the downhill zipline ride at Sabang’s Ugong Rock and who wouldn't mind trying exotic food (Tamilok) and digging out appetizing seafoods and succulent desserts in some of the artsy restos of Puerto Princesa. Thanks guys, until our next adventure!


We arrived on a sunny Sunday morning in Palawan. I knew right away that I’ll have fun in this city when I was greeted at the airport with proud prints “Welcome Charryl Gurrodap and Company.” Yay, I know I don’t have the best name in this world but to make it even look funnier just floored me.

From the airport, we went right ahead to De Loro Inn and Restaurant, our humble yet homey abode for three days. Quite contrary to the many negative reviews I’ve read online, I find this place really nice. I’ll rate it 4 stars (Note: I’m an easy to please person). But no, seriously, the ambience is quaint, though almost crowded with details. The staff were welcoming and nice. The rooms and comfort rooms are just about right and I’d say comfortable enough for three persons. The continental breakfast wasn't bad. The only beef I had was when we had to transfer to another room on our second day because the AC was busted. The original rate advertised on their website is for P3,800/pax. But we were given 10% discount upon paying the reservation. So we paid a total of P3,420 per person inclusive of airport transfer, welcome drinks, continental breakfast for 2 days, accommodation on a standard AC room, whole day tours with lunch at Honda Bay and Underground River. Fair enough, I think.
For lunch, we went to Bilao at Palayok. I'd say this is where I found the tastiest dessert (Buko Fresh) and favorites Seafood with Gata and Clam Soup. Yumyum.

After the sumptuous lunch, we rented a trike (P600) for our tour around the city. Edgar, the trike driver, guided us to places like Butterfly Garden (entrance fee: 25), Crocodile Farm (entrance fee: P40), Mitra’s Ranch, Baker’s Hill (never miss the Ube/Mongo Hopia there), Tiange, Tiange (buy goodies like cashew nuts and some souvenirs), Baywalk, Immaculate Conception Cathedral and Plaza Cuartel.


The funniest thing about our first night in Puerto Princesa was that the supposed power nap at around 6 p.m. turned to a long night sleep. We missed dinner and the city night life on our very first day in PPC. We were all too exhausted that our bodies immediately succumbed to sleep.

The following day, after the really long night before, we were fresh and ready for the Underground River Tour. We left the city at around 8:30 and reached Sabang Bay at around 10. After about 20 minutes boatride, we finally reached the famous Underground River of Palawan. Tourists were everywhere that day so we had to wait for more than one hour before we had our cruise inside the cave. It was a little chilly inside. The only sounds we could hear were from the bats and the jokes of our very entertaining boatman, Kuya Rogelio. Promise, bumenta sakin mga jokes niya! :)

After the 30-minute paddle boat ride inside the cave, we headed to Sabang bay for our lunch. In there I was offered to try the famous Palawan delicacy, Tamilok. According to the local people there, these slimy white something are found in rotting mangrove trees. Some say these are worms, some say it's not. Wait, wait, did I say worms? Yes, I ate worms then, 3 worms! Yikes. It tasted like an oyster less the meaty part. Seriously, this for me will be a once in a lifetime experience. Never again! Hahaha! 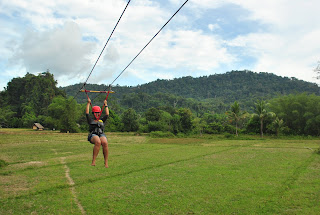 
We had a side trip at Ugong Rock. Alright, so we paid P500 to climb the Ugong Rock and to do the zip line ride, not on my budget but I was ready to give in since according to our guide the proceeds help fund some of the local children’s education. Ugong is Tagalog term for echo. We’ve tried tapping some areas inside the cave and it did create echoes. Interestingly, we’ve also seen some signs that the site was once submerged to seawater (according to geologists). The spelunking experience took only 15 minutes. Then once we’ve reached the top of the hill, we readied for the 21-sec zip line experience. It was too quick, but I enjoyed it! 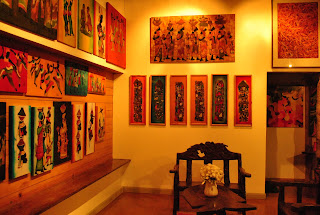 Our last night in Puerto Princesa was spent on food tripping. We first went to Badjao Seafront where we ordered stuffed squid and some desserts. Then we had our main course at Ka Lui Resto where we drooled over the buttered shrimps and played with their "Naughty Dessert." After all the food we devoured, I was too spent and easily ended the day. 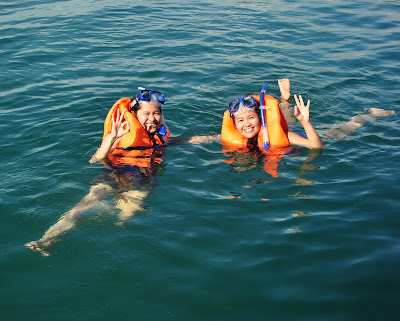 Cha and I enjoying the waters of Pambato Reef

Our last day was the Honda Bay tour. I had fun snorkelling at Pambato Reef where I saw some giant clams. I wasn’t very satisfied with the fishes I saw there and almost screamed for more. Only later did I realize that our next destination, Snake Island, was a nice spot to play around with fishes. I felt like I was literally inside an aquarium! Just like the one I had in Coron, snorkeling in Puerto Princesa is something not to be missed while in Palawan.

Our last stop was at Pandan Island. The place has fine white beach but since the water was almost rowdy, I decided not to swim. The place was very picturesque though. It reminded me of Coron’s Banana Island.


Our tour ended at around 2pm because we have a flight to catch at 5:30. As always, I felt so drawn to nature that even my body abhors the fact that I had to go back to reality very quickly.

*Travel budget depends on the number of people going. For me, after all the out-of-budget indulgences, I've estimated my expenses to be about P7,000 (inclusive of airfare).

Posted by Che | BackpackingPilipinas at 12:23 PM