They found themselves sitting on a concrete bench infront Siliman Hall near the Anthropology Museum. The early afternoon sun was tickling their skin, but the freshly mowed verdant grass offer some sort of comfort to their exhausted feet.


They couldn't get over the fact that they've just been booted out of a dorm, thinking how two legit travelling friends could not be allowed in. But after giving it some thought, they caved in to the idea that a policy is a policy. And that has to be respected.

Finding a place to stay in Dumaguete City was the least of their worries. They were on the look out for anything affordable and comfortable; a roof and a bed to settle their restless bones.

He was the stranger who joined her supposed solo sojourn.  They ended up in Siquijor, and this overnight stay in Dumaguete was the final leg of that surreal weekend in Visayas.

They've decided to roam around Siliman University before heading out to look for a place to stay in. The first stop was the Anthropology Museum. After paying the P30 entrance fee, they've explored the museums themeselves. It was quite an interesting museum visit because of the exhibits inside. It has on display some earthen jars used during ancient times, burial jars with skulls on it, voodoo dolls with a pin on it, witchcraft concoctions and love potions from Siquijor. Picture-taking was not allowed in the ground and 2nd level so they didn't get to take home a souvenir photo of those eerie and interesting stuff. 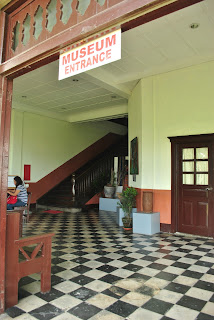 After they've wandered off Siliman U campus, they walked around the main roads of the city. Dumaguete is a  tiny city with a lot of coffee shops around. It has quaint cafes in almost every corner which kinda gives an aura of ease and unhurried life of the people there. Especially along Rizal Boulevard, it has the quintessential provincial life scenes where some are taking afternoon strolls while some choose to bike or jog or just simply sit in the sea wall listening to the sound of the waves. Interestingly enough, Dumaguete is called the City of Gentle People.


They found a place to stay overnight located across Rizal Boulevard. The Honeycomb Tourist Inn offers affordable rates with free breakfast. They loved the location since it's accessible to most places of interest in the city, and it's along the strip of restaurants and cafes.

It was already late in the afternoon when they've decided to haunt for the best places to eat around the city. A few steps from Honeycomb Inn, they stopped by the famous Sans Rival Cakes and Pastries to get a bite of its bestsellers sylvannas and sansrival. It was a real sugar treat!

From Sans Rival, a scoop of ice cream capped the afternoon delight. They walked towards Panda Ice Cream Hause, near Siliman University entrance, for their famous fried ice cream. It's basically an ice cream coated in deep-fried waffle. There wasn't much to its taste, but still a good thing to have tried it.

For dinner, Hayahay Treehouse Bar is the place to be. The menu offers some really mouth-watering samples of seafoods. It also has a cozy and refreshing ambiance being that its fronting the sea.


From Hayahay, they scored the main plaza of Negros Oriental. Just when they thought the night life in Dumaguete ends at 7pm, they were caught in the middle of a crowded plaza as the province celebrated Buglasan Festival. The merriment was highlighted by a dance contest (wherein their favorite beats were Gangnam Style and Teach me How to Doggie), tiangge, exhibits from each municipality and a beer plaza. The festive air was definitely around that place that night.


Their exhausting day easily ended after grabbing a bottle of ice-cold San Miguel Beer in one of the stalls in the plaza.

The following morning, they thought of exploring further other landmarks in the city. From Rizal Boulevard, they walked a few blocks going to St. Catherine of Alexandria Cathedral and the historic Dumaguete Belfry (the oldest in the province). It is said that this belfry was used by inhabitants to forewarn the townspeople of impending attacks of marauders.

Just across the cathedral is the city plaza where the tourism office is located. From the plaza, they rode a trike to get to the sinking ship near the Bell Church. This half-sunken cargo ship capsized off the coast of Dumaguete during the Tropical Storm Sendong. For some reason, its wreck has become one of the tourist attractions since then.


After touring the city, they had an early lunch back at Sans Rival since she had an early afternoon flight back to Manila. His flight will follow two hours after. The fleeting weekend they spent in Siquijor and Dumaguete will linger on for a long while. But there was an unspoken uncertainty as to whether they'd still have the same tight bonding once they get back to Manila.

After exchanging thank yous for the beautiful weekend, she said goodbye and left him in that corner along Rizal Boulevard -- alone. As the trike drove towards the airport, and as she looked back to his receding figure in that corner, she only had one thing in mind. Will she still see him again?

Posted by Che | BackpackingPilipinas at 3:32 PM