I vividly recall decades ago, my sister, Cha, brought home some marble wares like dolphin, mortar and pestle and ashtray from Romblon. She had nothing much to say about her trip, but she made it quite known to us that true to what we learned from our Sibika At Kultura books in grade school, indeed, Romblon is the marble capital of the Philippines. I have imagined most of the houses there, at least, have marble fixtures in them.  Since then— brought by too much curiosity about the place—Romblon had been on my list of “Places to Visit” in Luzon.

Maybe because it holds a special spot in my consciousness that I decided to make it the last province I’d visit in Luzon for my 80before30challenge. I wanted to hang on to the excitement of seeing what’s in there. Is there more to Romblon than just its vast marble reserves? I wondered.

I made a few research before actually going there.  The internet had write-ups about Tablas Island and Carabao Island, but had not provided enough details about going to Romblon, Romblon, which was the destination I wanted to see. There were not so many blogs either, and sadly, the provincial tourism website didn't provide much help for DIY travelers like me. Maybe that’s what made me want to go there, even more. It was the excitement brought by the fact that it remains to be one of the most overlooked destinations in the country.

Last April, along with my friend, Anchi, I finally fulfilled a “childhood dream.” I made it to Romblon.

Our trip going there wasn't as easy as I have imagined it to be. It was a very loooong and arduous trip.  From Manila, we boarded a bus going to Batangas Port. After two hours, we arrived at the port, and were quite lucky to have caught the last trip (5:00 pm) of the RORO bound for Romblon, Romblon.  Since we booked late, we had to bear the agony of sharing a single bed in an open-air deck, in a sweltering mid-summer day. We also had to share the crowded deck with a handful of people endlessly buzzing, and some even playing OPMs in full volume, with songs like "O giliw ko miss na miss kita" perpetually playing. I could see everyone getting ready for what was to be a long night trip.  I cannot complain, but I was seriously very worried for my travel companion.

The RORO sailed off an hour late of schedule. As dusk fell that day, I could see from my bed the magnificent sunset making its way to the horizon. I marvel at how each sunset brings so much excitement especially when I’m on the road. I just feel that sunsets in the provinces are much more beautiful than sunsets in Manila. Maybe it’s the sun’s unobstructed view, the warmth it brings just before it sets, and the familiar cool breeze I feel once darkness embraces the surrounding.

As the boat waded past the island of Mindoro, Anchi and I decided to just spend the night in the open deck since both of us are finding it impossible to catch sleep. Finally after almost 10 hours, the boat docked in Romblon. We were greeted by morning peddlers.  And our first breakfast in Romblon was a cup of coffee and  two pieces each of “boknoy” (a local term they use for siopao).

From the port, we asked a trike driver for the best beach near the town (Fare: P 100).  Kuya Richard, the driver, brought us to Tiamban Beach (Rate: P650/night/fan room), located at Barangay Lonos, about 15 minutes away from the port. The resort has two available rooms for overnight stay and most of the cottages are for day trips only.

After having all our stuff settled, I immediately checked the shoreline. The beach was pristine and calm, especially so with the morning sun already aglow in the nearby hill. With the fine sand under my feet, it couldn't be more perfect than that.

After catching some rest, we contacted again Kuya Richard to tour us around (Fare: P200/half day). And because I had to satisfy my curiosity about Romblon’s marbles, I kindly asked him to bring us to one of the marble processing areas. They showed us how the huge chunks of marble rocks were turned to pieces we commonly see at home, like balusters and tiles. From what I gather, it looks like it has to go through a lot of process before it can be delivered right to our door steps.

After talking to the guys at the marble area, we were supposed to go to the marble mining site, but I begged off. I’d surely be brokenhearted to see the damage to the mountains brought by the mining activities. I had to pass up.

Kuya Richard informed us how the marble business in Romblon had significantly dwindled over the years. Although he said that the amount of marble mined in the mountains of Romblon is not depleting, he added “Nanganganak ang mga marmol dito,” it is the quality that’s being scrutinized in the market. They only get the consolation from mining the more precious green and century marble stones every now and then. With the competition posed by cheaper and finer stones like granite, ceramic and porcelain, the white marble of Romblon is seeing a bleak future. 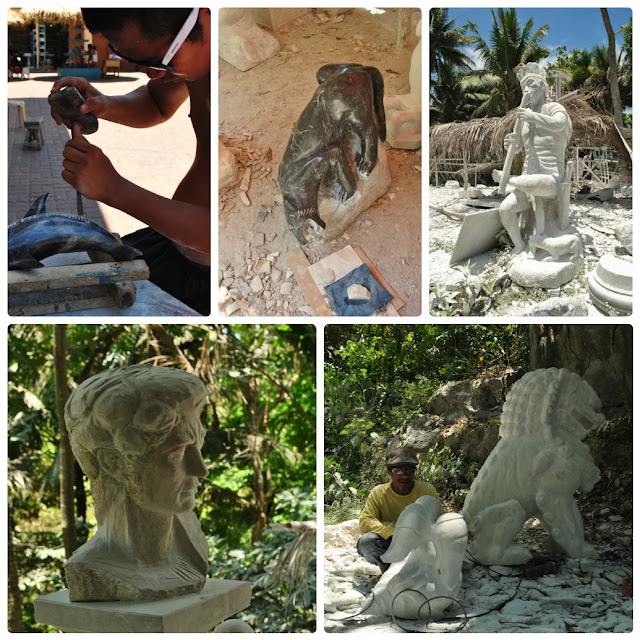 But there is one industry that has the potential to put this province to travelers’ map –tourism. I have yet to see a place with so many clear and white sand beaches which are stone’s throw away from the town proper. As we took the trike from the poblacion to our resort at Lonos, the beaches we saw make me want to stop and jump right in the clear blue waters. Check out Bonbon Beach!  Escape enthusiasts will definitely enjoy the sight of these beaches as much as we did! 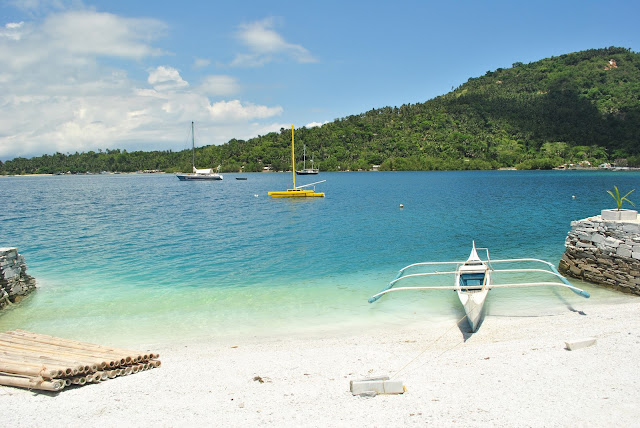 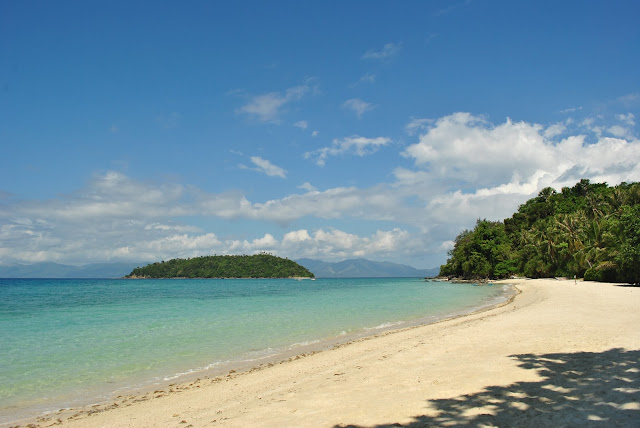 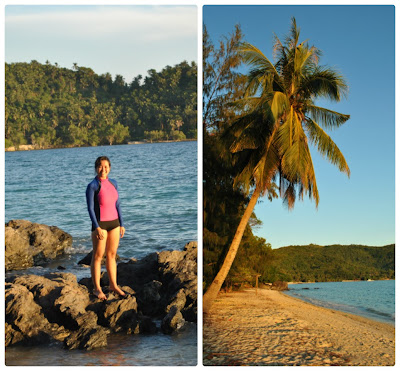 We spent the whole afternoon lounging in the beach. There were a few local and foreign tourists in sight, everyone seemingly enjoying the delightful afternoon while basking in the summer breeze and sunshine. It was a perfect beach day. We were also rewarded by a splendid sunset that day!

The following day, we woke up early to hear the Sunday mass and visit Sto Nino de Romblon at St. Joseph Cathedral. It gave me goose bumps hearing His story of being lost and found after 22 years,  and finding His way back to the cathedral,  in His very own home. Somehow, I felt an affinity to the Sto Nino. That after all this wandering, this travelling—no matter if I sometimes lose sight of my destination—there will always be a place waiting for my return, a place I call my home.

My trip to Romblon was quick, but a beautiful one. No matter how difficult the journey may have been to get there, the amazing sights and the warm people we met there made the trip memorable.

I bought my mother a small souvenir vase made of marble. She brought it to our home in Catanduanes, and I’m already thinking it now stands alongside the ones Cha had from her trip to Romblon decades ago.

How to get to Romblon, Romblon:

*Many thanks to Anchi for the company. :)
Posted by Che | BackpackingPilipinas at 1:47 PM

Email ThisBlogThis!Share to TwitterShare to FacebookShare to Pinterest
Labels: 80Before30, Romblon