We took the 10 p.m. trip to Banaue via Ohayami Transport (P450 one way), the only bus company that plies the Manila-Banaue route as of this writing. It was a nine-hour bus ride which I didn’t really mind since I slept almost the entire trip. At 7 a.m., we reached Banaue, Ifugao.

We were led to People’s Restaurant for breakfast. The view of the rice terraces from there was excellent but I’d rate their service as poor. Imagine, they forgot to serve our meal! :(

There are three options to reach Batad:

First is to take a trike from Banaue up to Batad Junction (P400/ trike, one way). From Batad Junction, walk for about 1 hour to Batad Saddle and from there walk another 2 hours to reach Batad Village. (That’s a total of three hours of extensive hike! This option is good for people who have strong legs and have regular exercise.)

Second is to wait for the afternoon passenger’s jeepney (P150/person). There is only one jeepney that goes directly to Batad Saddle. Usually it leaves Banaue at around 1-4 p.m. From Batad Saddle, passengers have to take the 2-hour trek down to the village. (This option is the cheapest but not good for tourists who wanted to reach Batad immediately. Waiting for the jeepney to load up will eat a lot of your time.)

Third is to hire a private jeepney (P2,500/jeep, one way) that will take you directly to Batad Saddle. Eric and I thought this option to be the most convenient. So we were lucky to have met five other tourists heading up to Batad who agreed to share the jeep rent with us. We also arranged for the same jeep to fetch us the following morning from Saddle to Banaue (P1,500).

Before heading to Batad, we had a side trip to Banaue Viewpoint. It was my second time to see the place but I’d say this recent one is far better. The weather was gorgeous and the rice paddies were in full green.

We also stopped by the local market to buy stuff we needed in the village. We were warned about how prices in Batad could cost an arm and a leg. 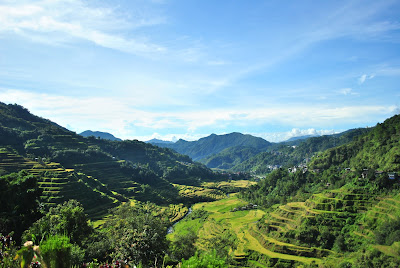 Then our group started pushing towards Batad Saddle. I realized that the way going there was crazy rough. And after an hour of a bumpy and rugged mountain jeepney ride, we finally reached the place.

Just when I thought that the ride going to Saddle was all the adventure, I was way wrong. The two-hour trek down to Batad Village was the real thing. The all-downhill trek with deep ravines on your other side and the warm midday sun above you wasn’t exactly a walk in the park. It requires a lot of balancing, not easy for me. Breakfast-deprived and legs already hurting, I felt like quitting midway. But of course, I had to match the pace of our group. Kahiya naman.

What to bring during the hike: water, hat/cap, hiking poles and good shoes.

Close to noontime, we finally reached our destination-- Batad, finally! :)

Batad is a village within the municipality of Banaue, Ifugao Province, "about 370km by road from Manila. It is about 18 Km travel from Banaue, of which about 15 Km is by road (to the Saddle) and about 3 Km is walked along a mountain trail."

At the information center, we were asked to register and ink our name and purpose there (for security and tourism). We also handed out some cash donation for the village.

After, we went to Ramon’s Homestay. The place offers a very simple and spartan-like accommodation. What attracted me stay there was for the authentic Ifugao hut experience (P300/person). Kuya Ramon, the owner, opens three of his Ifugao huts to travelers. The one given to us was the oldest and the smallest, a century-old traditional Ifugao hut that has a “strange and spooky" interior. It has animals' skulls hanging on the walls  which is believed to drive bad spirits away. It also has dried rice stocks in one corner, a fireplace (to keep insects away) and some jars and anitos. I would admit that at first I had qualms if I could survive a night there. But I did. Strangely, I liked it! I had a warm and eerily quiet sleep that night. 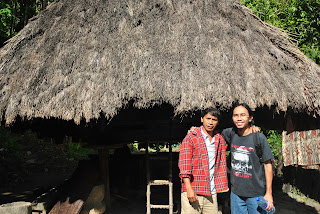 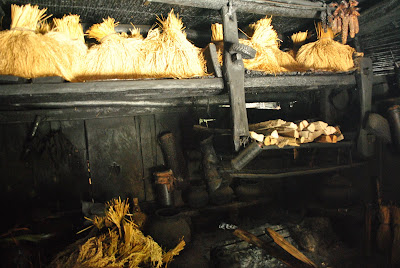 Inside a traditional Ifugao Hut. This hut is where we stayed in. :)

Part of our itinerary (P400 group tour for 3) was to trek Batad rice terraces (which resembles an amphitheatre) and to see Tappiyah Falls. The up and down hike on these rice paddies were not as easy as I thought. One false move and I could easily dive down the 2-3 meters deep rice field. The trek down to Tappiyah falls was also very challenging. Whenever I thought of how steep we would climb back from the waterfalls to the village, it was almost unbearable. But all those anxieties faded as soon as we saw the wild and angry Tappiyah Falls. It has frigid water and I could not resist taking a quick and refreshing dip. It was so good! :)

Surely, the trek back to the village was agonizingly painful for my already wobbling knees. We reached Kuya Ramon’s place nearly sun-down. 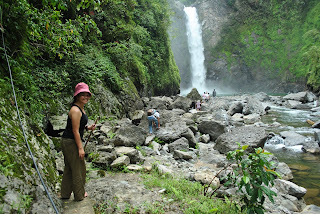 At dinner, we exchanged stories with our travel mates Bernice, Jaisan, Sarah, Johan and Shy. We were also quite lucky because Kuya Ramon was there to answer some of our questions about Batad and its traditions, a man passionate about his culture and eager to share it to visitors. He also offered to put a bon fire for us but we humbly declined since everyone was already eager to sleep. Exhausted, we easily called it a day and off we went to our candle-lit Ifugao hut to get a good night rest.

In the morning, we readied for the trek back to Batad Saddle. After breakfast, Eric and Sarah gamely tried on some Ifugao costumes for photo op.

Then we headed off and took our last glance of the beautiful rice terraces of Batad. It was a fairly short stay in this amazing village. I wish to return someday. And I wish, on my return, the remoteness, the calming peace and the scenic green rice paddies will be still be there. 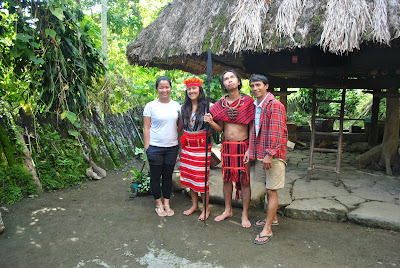 with Sarah, Eric and Kuya Ramon 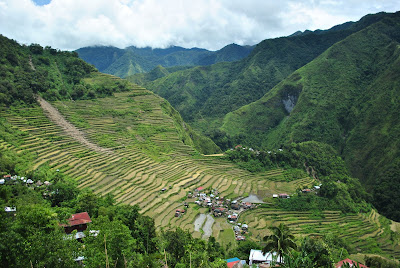 There are two options for the Banaue-Manila trip:

First is to wait for the 7p.m. trip of Ohayami Transport. Estimated arrival in Manila is about 4a.m.

Posted by Che | BackpackingPilipinas at 9:25 PM