I woke up to the snoozing sound of my phone. It was only 4 in the morning and the place where I stayed was very still. Aside from the occasional ticking sound of the electric fan, I could hear nothing but silence. Since I missed the van going straight to Santa Ana, I was left with no other option but to spend my night alone in a humble lodging house in Gonzaga, a town one hour away from Santa Ana.

I texted kuya Ernie, the kind van driver I met the other day and who helped me find a place to stay in, to fetch me at the lodging house. He arrived in a moment's time and joined me for a morning coffee while waiting for the bus. After about 30 minutes, the bus arrived. After thanking kuya Ernie, I boarded the bus and off I was to Santa Ana, the jump-off point going to Palaui Island.


As the bus was trailing northbound of Cagayan, a thin streak of sunlight was already showing in the horizon. It looked like it was giving me signs of a promising weather ahead that day. I could only keep my fingers crossed, hoping that a clear blue sky with patches of clouds hanging by and a beautiful green scenery would be my souvenir photos from Palaui.

We arrived in Santa Ana in less than an hour. At the bus terminal, I hailed a trike to drive me to the wharf where motorized outrigger boats going to Palaui Island are docked. After about 15 minutes, I arrived at San Vicente Port.

Since it was still too early there were only a few people around there when I arrived. I immediately asked for ways how I could rent a boat going to Palaui. Since I was travelling alone, I tried to haggle for cheaper boat rate. But the boat operators I've talked to refused to give in to my request. :(

They gave me two options: P1,800 going straight to Cape Engano or P750 going to the island then hike for 3.5 to 4 hours going to Cape Engano. Since I was trying to keep my expenses low, I chose the latter.

At the tourism center, located at the port, I paid P50 fee to get to Palaui, signed my name at the log book and discussed with the officers there the details about the boat that will take me to and from Palaui Island.

All set and already raring to go, I boarded a big boat that has a seating capacity enough to accomodate about 7-10 people. As the boat was speeding off towards Palaui, I was thinking of the people who I would have wanted to join me in that boat. I thought it would have been a happy crowd. :)

After only about 15 minutes of boat ride, I arrived in  Punta Verde in Palaui with the morning sun already up. I met Kuya Beloy, the leader of the guides going to Cape engano. He explained to me that the trek could take up to 4 hours and that there is a P250 guide fee. He also ushered me to a place where a small military unit is located and asked me to log in for security purposes.

Before I started my trek, Kuya Beloy and his wife ate Linda offered breakfast  and sent me off the trail with a packed lunch and a warm coffee. I thought, how could this people be so kind to a person they've only met just a few minutes ago! Right then and there, I already fell in love with Palaui. 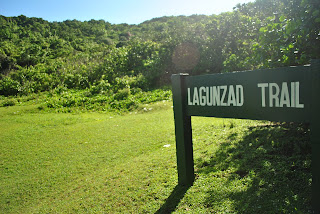 At around 7.30 a.m., along with my guide Ate Eufrocina, we hit the dirt road and started trekking the Lagunzad Trail. Good thing we started early because we had to walk along a very very long stretch of coral sand beach. The morning sun didn't hurt so bad. Aside from that long beach, we also had to cross three hills, pass by a thick forest, streams, a mangrove park and a rice field. Bad luck had it because I also lost my eye glasses during the trek.   Midway I was already thinking that hiking to Cape Engano wasn't exactly a walk in the park as I thought it was going to be. But despite that, I enjoyed the scenic view of the green fields and mountains, the humming sound of the birds and the wild plants and flowers I saw along the way.

Finally, after 2.5 hours, we reached the tail end of the trail. And pain of knowing that I lost my eye glasses and my legs already hurting was rewarded by a breathtaking sight of the lighthouse perched on a hill and the verdant grass that looked very much like the ones I saw in Batanes. It was simply amazing! 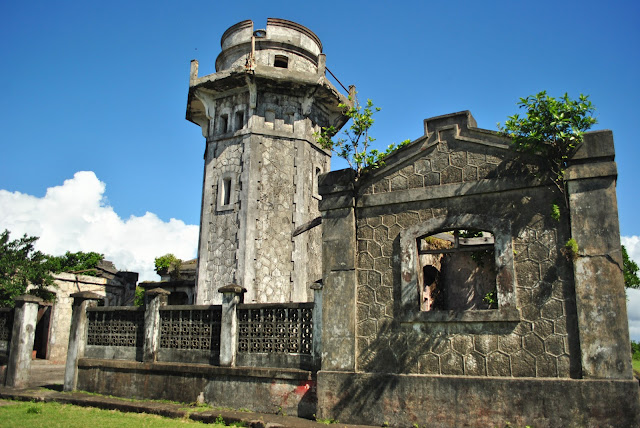 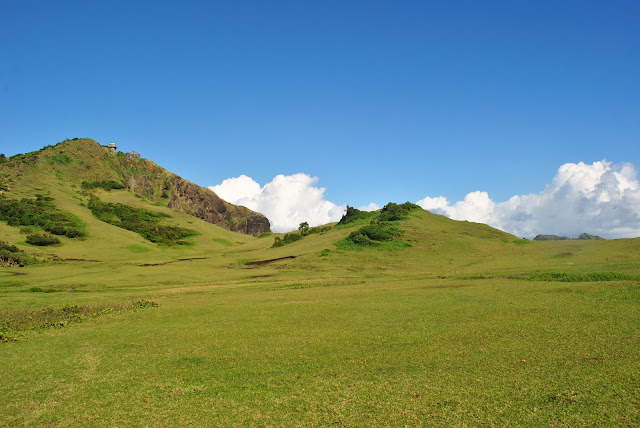 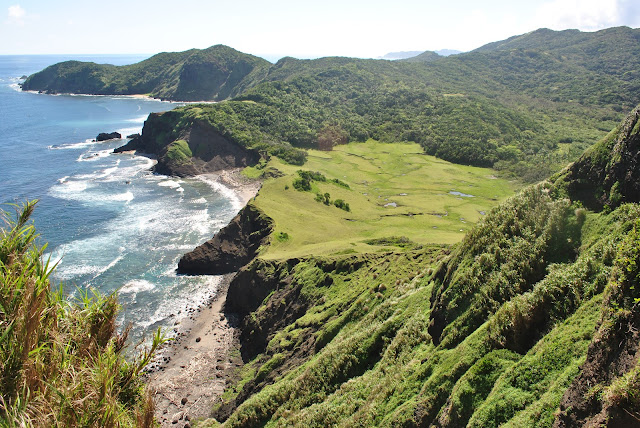 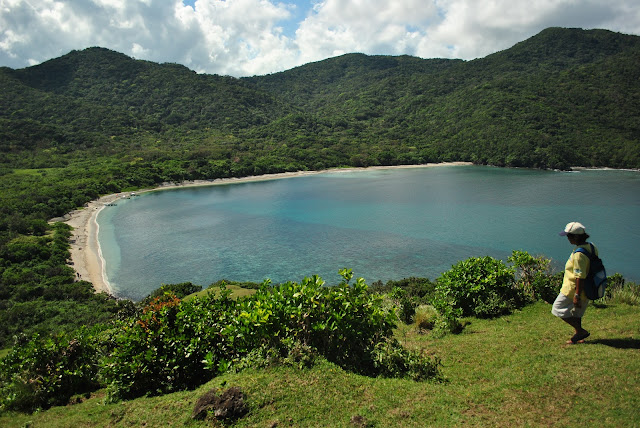 I realized that the trek did not end to just seeing the lighthouse from afar. We had to take the concrete stairway zigzagging towards the top of the hill. There were a handful of tourists when we arrived at the lighthouse. The place was very picturisque and everyone there seemed to be having a photo holiday.

Palaui is known for its centuries-old lighthouse known as the Faro de Cabo Engano or Cape Engano Lighthouse. It was built by the Spaniards in the 18th century following the designs of other lighthouses like Cape Bojeador in Ilocos Norte and Faro de Punta Capones in Capones Island, Zambales. Although the pavilions around the area had already been reduced to ruins, the lighthouse still functions to this day using solar panels.

I kept imagining how great it must have been to live in that place during its heydays. How mornings were greeted with the sight of the crystal blue sea, with the beautiful Dos Hermanas islets in the view and the cascading green grass below the hill. Aww!

After a few minutes exploring the lighthouse and taking in all the beauty around it, we started to descend. I couldn't resist taking a quick dip at the clear blue water at the beach located near the hill. I felt so bad that I had to get off the water too quickly. I had to convince myself that I have a bus to catch in Santa Ana so I felt really pressed for time. After a hurried lunch, ate Eufrocina and I started our trek back. And great luck was on our side, we found my glasses on our way back, unscathed and peacfully lying on some yellow flowers along the way! yey! 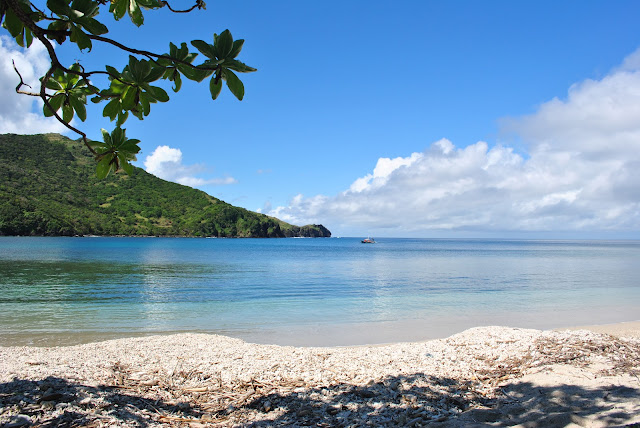 We reached the Punta Verde at around 1p.m. and after thanking kuya Beloy, ate Linda and ate Eufrocina, I boarded the boat waiting for me at the beach area. In no time, I was being ferried back to Santa Ana. I looked back at Palaui Island, thought about the beautiful people and sights it posses and I realized I was missing it already. 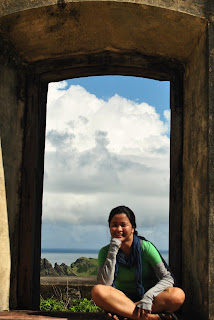 How to get to Palaui Island:

Posted by Che | BackpackingPilipinas at 12:37 PM