The thing I have with travel blogging the Philippines is that I sometimes run out of the right adjectives to describe each place I’ve been to. And now I’m faced with the same dilemma. How will I describe Batanes? Breathtaking, magnificent, panoramic, rustic. All these words suit this place just well. But for this blog, I will borrow the Ivatan word Mavid, which means beautiful... Mavid Batanes.


Eric, Kim and I were asked by an Ivatan why we decided to go to Batanes. I got an easy answer. I told him that I wanted to see the famous rolling hills and the UNESCO Heritage Site nominated old stone houses. But after our short stay there, I thought there is so much to see and experience in Batanes. Probably I will miss most the easy breeze at night and the sound bites of the sea waves and the grazing cows.

I’ve listed below some of my favorite experiences, the interesting places and things I discovered during my four-day stay in Batanes.

Falowa is an oval-shaped motorized passenger boat sans the outrigger. It is being used by Ivatans mainly for fishing and to get from one island to another. It can accommodate as many as 20-25 people.

Growing up in Catanduanes, I somehow feel that I’m used to being aboard boats, big or small. However, my Falowa experience was altogether exciting and different. During our 45-minute ride from Sabtang to Batan, the waves got bigger and it was almost like we were being shaken inside the boat. I was hysterical, thinking that the boat might turn over anytime soon. Gladly, we made it at bay safely. I learned the following day from Lando, our tour guide, that what we’ve experienced was way better than most days in Batanes. I couldn’t imagine using Falowa during the rowdy rainy season.

Batanes is the only place in the Philippines that has four seasons. We thought that we were lucky enough to be there during the summer season, when the sky is supposed to be clear. True enough, we enjoyed plentiful of sunshine and took advantage of the blue sky as photo backdrops for the first two days. On our third day though, we were surprised to see bleak sky, just in time for our trip to the Marlboro Country. How unfortunate because I still think it’s one of the most picturesque sites in Batan. When we arrived there, it was windy like hell. Luckily, it didn’t rain that day and before we ended our tour the weather improved significantly. The weather there can change in an instant, just like experiencing winter in the morning and ending the day in a cool summer breeze.

I'm fond of collecting photos of churches from different places in the Philippines. I was extremely thrilled to have visited seven churches/chapels during my stay in Batanes. I feel like each church is almost identical to another one another, at least the facade are. They are all very picturesque and it’s nice to see that all are still standing proud.

I was drawn to the people of Batanes during my short and random interactions with them. I enjoyed listening to Lola Ida’s stories about her daily life as the owner of the famous House of Dakay, the oldest traditional house in Batan Island. How she would graciously accommodate tourists even though some of them have shown disrespect when they enter her house without even knocking at her door. L I’ve learned that I have to say “Dius” to the owner of a stone house whenever I want to enter or take a photo of it.

I think respect to the local people is a very basic rule in travelling. One of the lessons that travellers or tourists have to learn is to respect the local people and as much as possible allow them to live normal lives and not to treat them as sort of ethnic people who are mere human interest subjects to achieve great photos. I admire them for somehow having kept their culture/traditions guarded from modernity. The Ivatans have remained secluded from mainland Luzon for a long time and I think this is probably the reason why they seemed to be friendly whenever I greet them but at the same time almost withdrawn and shy, in general. I also have to add that Ivatan women are noticeably very polite.

One thing I’ve noticed about the Ivatans I’ve interacted with is that unlike other places in the Philippines where some local people capitalize in the influx tourists by asking for photo-op fee and “donations,” Batanes has almost none of them. With the exception of the P20 fee for using Vakul or Kanayi for taking photos at the Chavayan Weaving House. True that most of the people there are living a Spartan-like life, but I’ve not seen a single beggar. What I saw were hardworking people bringing home produce from farmlands mostly by foot or using bicycles.

Going around Basco at night won’t pose any problem, too. The place is peaceful enough that police officers are gun-less while patrolling the community. The Basco Chief Inspector, whom we talked to, also said that there is “almost no crime” around Basco.

This place amazed me. Imagine a store where one can buy stuff like beer, water, souvenirs, etc and no one looks after if it will be paid or not. The store owner expects everyone to be honest enough to allow them to list the products they bought along with its corresponding price and then leave the payment in a drop box. Literally, no one mans the store. I thought it’s very interesting. Very telling of how Ivatans live their lives, people with dignity and integrity. 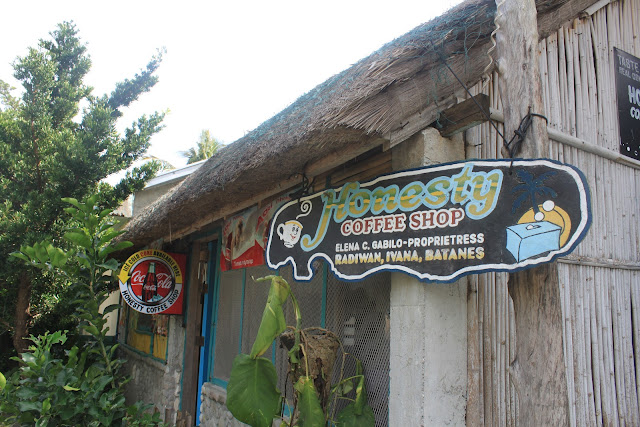 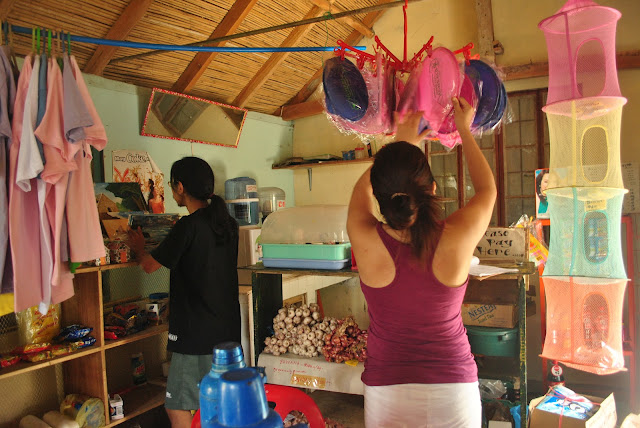 Green pastureland and cows grazing the slopes make up most of Batanes scenes. It was a sight to behold and I felt I’ve taken too much photos of the rolling hills and ridges. My favorites are the Vayang Ranch (rolling hills) where the landscape was truly breathtaking and the Chamantad- Tinian Viewpoint in Sabtang Island where I saw really nice mountain slopes and rock formations below the cliff. I have to add that the best way to explore Sabtang Island is atop a jeepney. Basking in the open sunshine and enjoying the beautiful sceneries around was pure bliss. Not to mention if you have great people aboard, the way I experienced it with my dear friend Kim. The bumpy ride and deep ravines below the cliffs also added more fun to the adventure.

During our tours I’ve seen three lighthouses, the ones in Basco, Mahatao and Sabtang. I’d say I liked most the one in Naidi Hill in Basco. It was such a great place to enjoy dusk over a cup coffee with friends (yes, there is store up that hill). I thought that place is very nice indeed.

This is one of the newest inns in Basco. I was a bit disappointed at first when we were told that we were being transferred from Batanes Seaside to Amboy’s. Well, that disappointed soon waned when we finally saw the location. It has a beach across the road where we had a sunset swimming delight one afternoon. (Note: the beaches, both in Batan and Sabtang, are not the best that I’ve been to. The waves were rough and the sand was not as powdery as the ones in Boracay and Panglao.)

The service was great, too. We had the chance to meet the owner and he was kind enough to tour us around aboard his new car. The staff was great and attended to all our needs. I'd definitely recommend it to those people planning to explore Batanes.

This sign along the main roads of Batanes is very iconic and prominent. Long before the use of text messages by people from the mainland, the Ivatans had already used “UR’ instead of the grammatically correct “your” in their road sign. 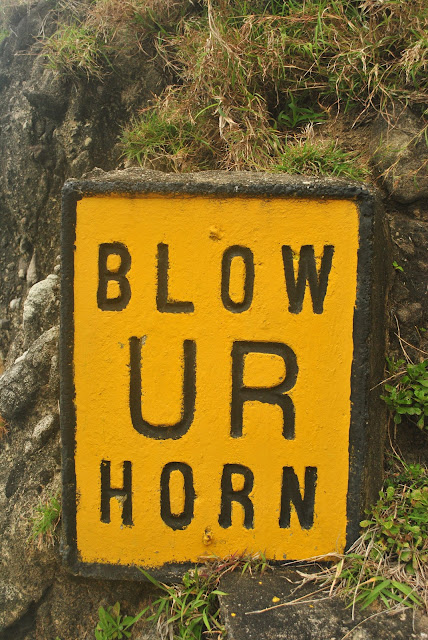 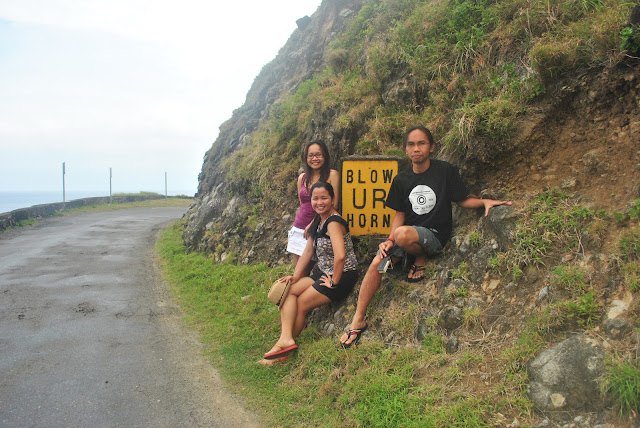 Travelling with Kim and Eric

It once crossed my mind that I wanted to explore Batanes on my own. Well, I’m glad I didn’t do it. There is no better way to enjoy Batanes than to be with people you can laugh out loud with while hanging out in one of those rolling hills, share a bumpy ride atop a jeepney, have a quiet beer night beside the beach and share endless stories and photos after the trip. 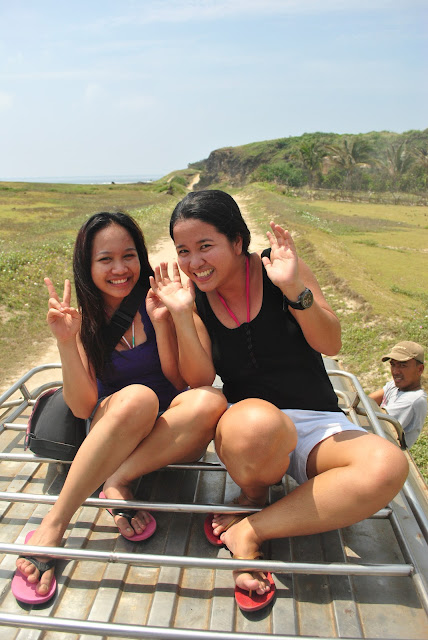 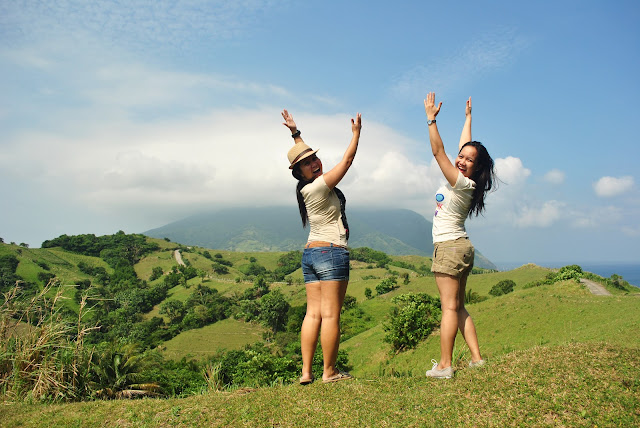 **credit to Kim Gil for some of the photos used in the blog.
Posted by Che | BackpackingPilipinas at 1:53 PM