Paddling Through the Wild Rapids of Cagayan de Oro River 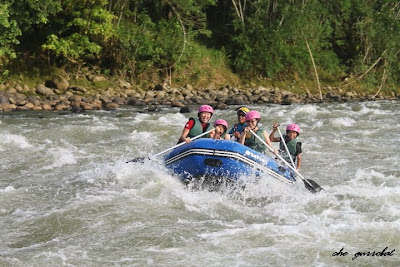 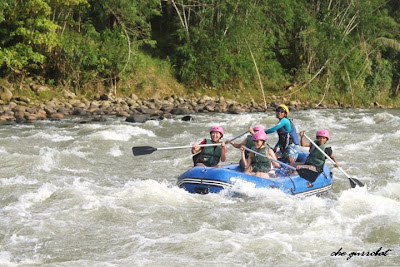 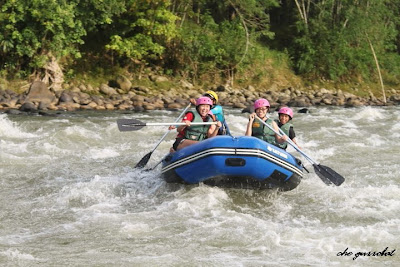 We left Manila an hour past our scheduled flight, thanks to Cebu Pacific. When we arrived in Cagayan de Oro City, I thought we won’t be able to push through with the river rafting. Who would actually do it nearly sun down? Well, we decided that our adventurous hearts won’t be cowed by the possible danger ahead. So from the airport Kim, Cha and I headed straight to Mambuaya, the jump-off point. We were supposed to start it at 3pm but with the delays, we hit the first major rapids a little after 4pm. And then the 13 kilometers sunset river rafting/cruising ensued.

Kuya Alfred, our river guide, gave some basic safety and paddling techniques before going into the wilds. Hitting 12 major rapids meant finishing the beginners’ level. I almost chickened out when I saw the strong current at the jump off point. As it turned out, it was the first test in our 3-hour journey. It even came to a point when we had to ask Kuya Alfred if we can cut the rafting trip to just 30 mins. Well, after surviving the first two major rapids, I was already wanting for more. More time, more major steering and challenging rapids.


One of the great things about the entire rafting experience is just the simple fact of communing with nature. Along the way, we saw and learned some facts about the river. It’s interesting to know that Cagayan de Oro was once submerged to the sea some million years ago. There were fossilized corals, caves and open meadows along the way. Also, we found out that the river literally separates the provinces of Bukidnon to Misamis Oriental.

Quite contrary, there were also moments of serenity while we were there. Maybe it’s because of the sunset effect but there was something nostalgic about the trip. After every rapid, there came a time when we would have to paddle through the calm and quiet parts of the river.

Tired but still hyped up, we finished at 7 pm. I have one thing in mind when we wrapped up. I’d be back to try the more advanced levels. Those wild rapids just fuelled my enthusiasm. High five!