The night before our scheduled flight bound for Catarman, Cebu Pacific informed us that our flight is being rerouted to Tacloban City due to aircraft issues. This would have been a major hassle knowing that land trip from Tacloban City to Catarman takes more than five hours to travel, but since we were in no hurry to get to Catarman, we gave in. Besides, the idea of doing a jumpshot at San Juanico Bridge totally charmed me.

I was with Cha, Janet and Ciel on this trip. We landed at Tacloban Airport as early as 5:30am. It was still dark outside but we decided to head straight to MacArthur Shrine, and just wait for the break of dawn there.

From the airport, a trike driver offered to take us to Red Beach, Palo, Leyte, where the shrine is located, for P150 one way. We thought it was cheaper compared to most cab drivers who offered P200-250 to get there.

After about 20 minutes, we reached the shrine. It felt surreal to be actually there and see first hand these larger than life bronze statues depicting the landing of American Liberation Forces led by General Douglas MacArthur and his allies on October 20, 1944. Officially called MacArthur Landing Memorial, this site commemorates MacArthur's famous parting word "I shall return," keeping true to his promise before he left the country after its downfall to the Japanese Imperial Army during the World War II.

Still too early, there were a few people around when we arrived. And just what most tourists there do, we had photo ops and jump shots, and even tried dipping in the knee-high pool just to get nearer the statues. 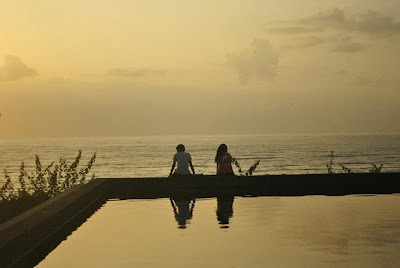 Just a few blocks away from the MacArthur Shrine stands another important monument in Palo, the Boy Scount Monument. It shows a boy holding a bamboo patrol staff that has eight nodes representing the eight members of the patrol. The symbolic patrol flag the boy is holding has a Philippine eagle inscription and on his left hand he's holding a tree seedling.

From Palo, we went to Santo Niño Church in Tacloban. I noticed how tall its bell tower is. The interior is a mix of modern and traditional architecture.

Tacloban City, a highly urbanized city, is about 360 miles southeast of Manila. It is the regional center of Region VII and the capital of Northern Leyte. It is also home to many tourism destinations including the Nino Shrine and Heritage Museum, People's Center Library, San Juanico Bridge, Balyuan Park and City Hall Grounds, Philippine-Japan Commemorative Peace Park etc...

A trip to Tacloban is never complete without setting foot on the famous San Juanico Bridge. From Tacloban, we took a jeep going there and paid P13 fare. The sun was already beating down when we arrived but we still insisted on walking up there, at least to the arch-shaped truss. The construction of this 21.9 million-dollar-worth bridge commenced on 1969 and was completed in 1973. It connects Tacloban City on the Leyte side and the town of Santa Rita on the Samar side. With a total length of 2.16 kilometers, it is considered as the longest bridge in the Philippines spanning a body of water.

The view from San Juanico Bridge was stunning especially on a clear morning. From there, I caught scenes of children having their Saturday excursion, fishermen out for a catch, the islets  spread around San Juanico Strait and the achingly serene view of countryside Leyte and Samar.

At around 11 a.m. we passed by San Juanico Bridge and we were aptly welcomed at the other end of the bridge with a sign, Welcome to Samar.

So long Leyte! And to borrow MacArthur's famous one-liner, I shall return! :)

Posted by Che | BackpackingPilipinas at 3:23 AM