As the van was speeding off along the coastal towns of Samar, I was reminded of how similar the scenes I was seeing there to most places I've been to before. The idyllic houses where women are seen sitting in front of their "porch." The children playing patintero on the side of the road. The lush green mountains and the coconut trees lining up. The occasional sight of bodies of water; from long beaches to streams to creeks, to meandering rivers and deltas. The clotheslines, the sari-sari stores, the water buffalos and the cattle egrets. These scenes pretty much depict the countryside of the Philippines. And Samar is definitely not an exception.

I've been to this island many times because my mother hails from Catubig, a quaint town that lies in Northern Samar. I had fond memories of my childhood visits there and will always remember how well accommodated we were by our relatives so I was really excited to be reunited with them after eight long years.


Our Samar road trip began as soon as we hit the road of Santa Rita, Western Samar. This is the town in Samar side connected to Leyte via the famous San Juanico Bridge. 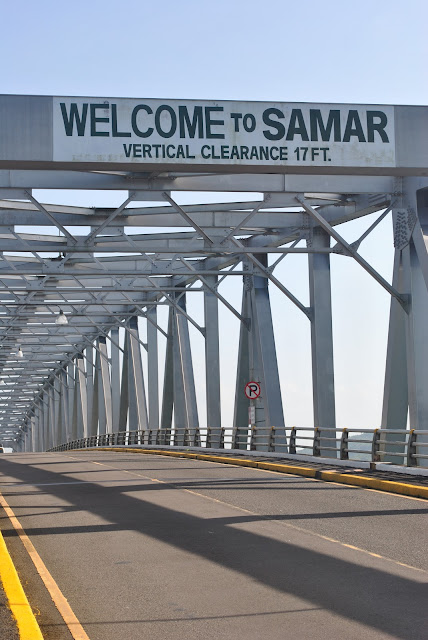 The island of Samar is composed of three provinces: Western Samar, Northern Samar and Eastern Samar. I've been told that Samar provinces are among the poorest in terms of economy in the Philippines. I was told by a cousin that most of the vast lands there are owned by few rich families. Thus, the local farmers are left as mere tenants and whatever little they have harvested are sold cheaply to these landowners. Isn't that sad?!

I was still with Cha, Janet and Ciel on this trip. We decided to go the long way instead of going straight to Catarman. That meant we will arrive in Catarman three hours late of our supposed schedule.

After two hours since we left Leyte, we arrived at our first destination, Catbalogan City. This small city located in the western coast is the capital of Samar Province. As soon as we got off the van, we immediately looked for a place to eat since we were all starving already. We settled in a semi-carenderia just a few walks away from the van terminal.

After lunch we decided to explore the city. First off that caught our attention was the Rizal monument in front the city hall. It was so uniquely done and looked very interesting compared to the usually clad Rizal monuments I saw around the country. This one depicts three naked men holding up Rizal's bust with his two novels Noli Me Tangere and El Filibusterismo serving as the base. I don't really know what to make out of it but it definitely caught my attention and made me smile. 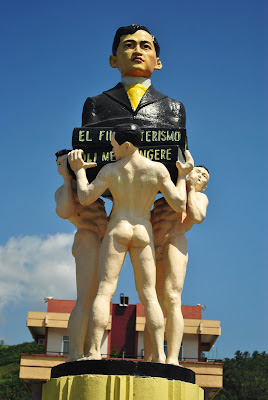 According to an article I stumbled upon online (read here),  the sculptor is Miguel Alcazar, a native of Catbalogan. He studied at the University of the Philippines College of Fine Arts, and he made the Rizal monument in 1959, before his family migrated to the United States. He died in New York in October 1980. It sat that Mr Alcaraz wanted to depart from the traditional Rizal Monuments and to adapt to moden times. The article also pointed out that  the three men represent the main regional groupings of Luzon, Visayas, and Mindanao. The models for the three men were Miguel Alcazar himself and his friends.

From that small park with a weird Rizal statue,  we walked a little further and checked out the Samar capitol building. I think it was newly painted and was immaculate white on a clear Saturday afternoon. We also saw some local people having their siesta and afternoon nap, children playing and swinging by the trees near the capitol building. Everything looked lazy that day,  quintessential Filipino park scenes. 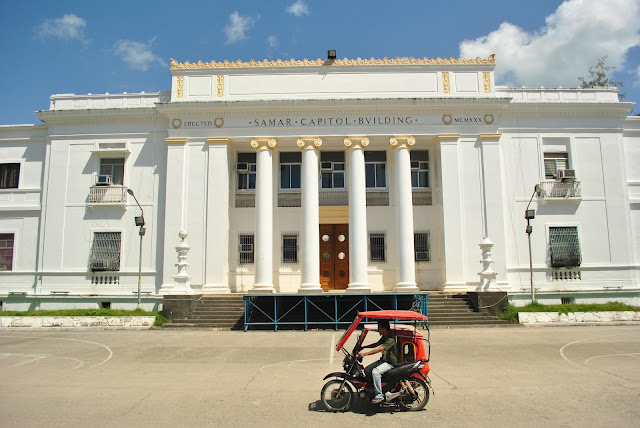 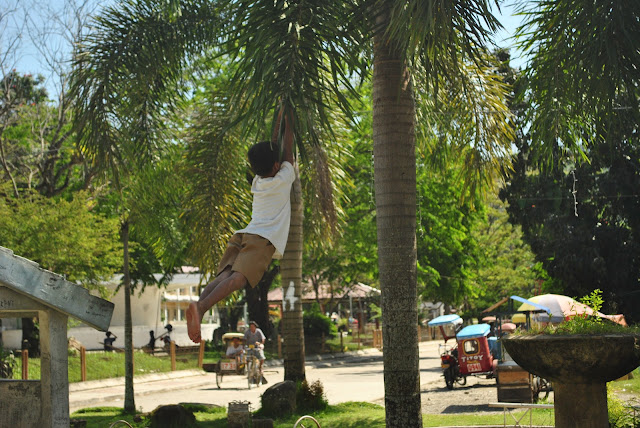 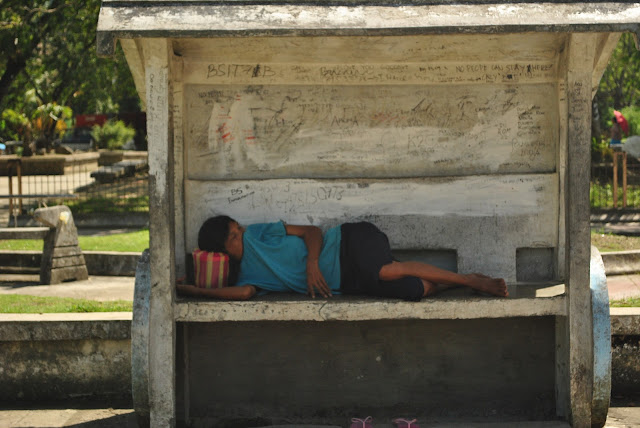 Then, rounding of our quick Catbalogan experience, we went straight to their cathedral. I was surprised to see the fantastic interior of this church. It looked modern but the the same time it's not too overwhelming as it still keeps the solemn mood inside. The facade, though, is simple and a lot low key than its interior. 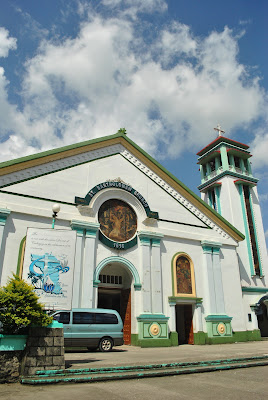 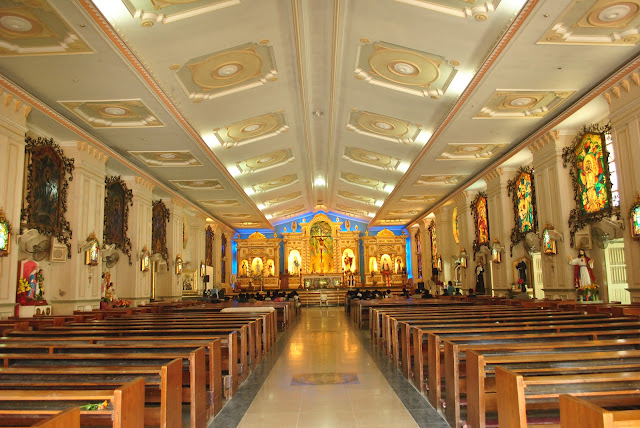 From the church, we walked a few steps and hopped in the next van bound for Calbayog City.

After almost one and a half hours, we finally reached Calbayog. I felt like this city has a lot more going on than in Catbalogan. There are major fast food chains around, traffic lights and more places to see there.

Upon arrival, we searched for the location of the church. It wasn't too hard to find since it has a huge belltower and copula dome. The altar has lots of details and the color-stained windows also add apeal to its interior. 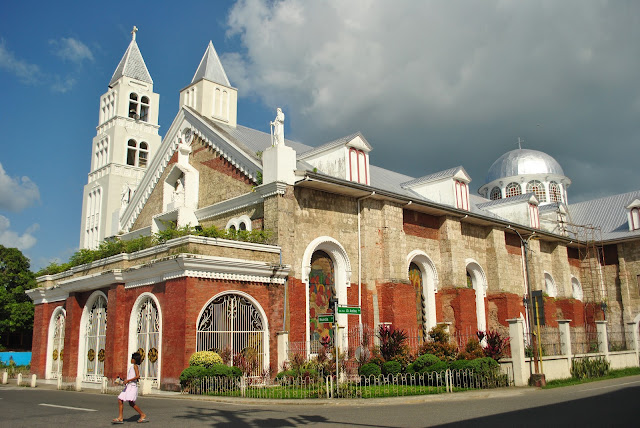 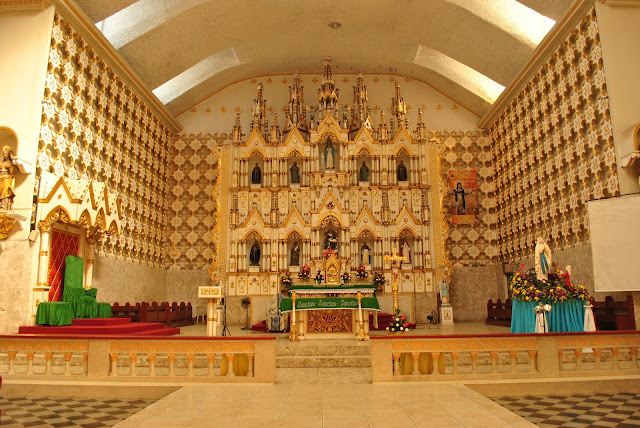 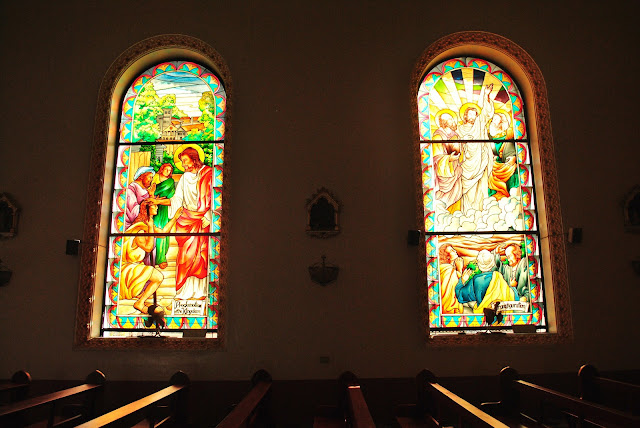 We also passed by their city hall and saw old and traditional houses located near the church. A little bit further, we stopped by a small park. It was packed with people going about their saturday afternoon affairs. 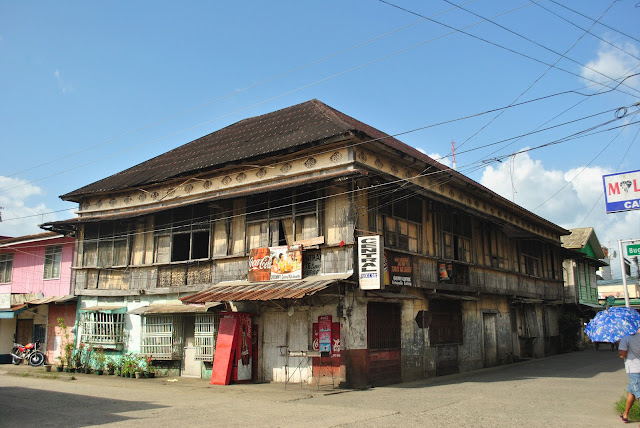 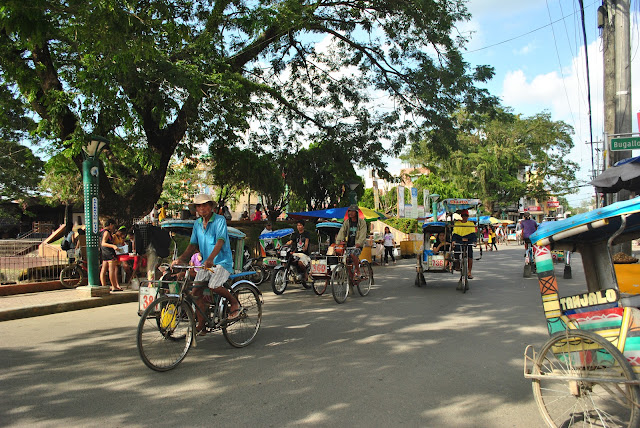 After a short while we gathered up our stuff and hopped in the last trip bound for Catarman.

The sun was already down when we arrived at Catarman Terminal. There, we were met by my cousin, Kuya Salde and his wife ate Mariven. Then off we went to their house to catch some rest .

The following day, we headed to the small town of Lavezares. We arrived there past 7a.m. on a drizzling Sunday morning. We were not able to go around much and spent most of our time at the wharf, near the public market. This is where the boats going to Biri Island are docked. But  we did visit their church and saw the municipal hall. :) 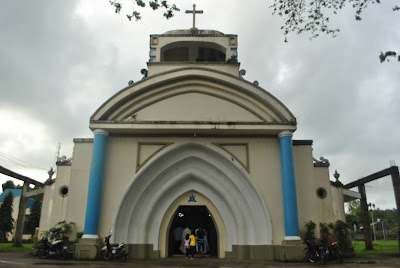 This 4th class municipality is endowed with lush vegetation, attributed mainly to the presence of a river that surrounds the town. My mama told me that it used to be the rice granary of Samar. She may be right as we saw vast rice lands while we were on our the way there. 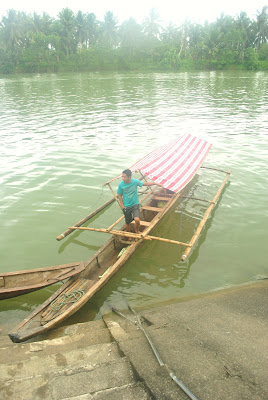 This is my mother's hometown. On this last trip, I was grateful to have spent some precious time with my relatives there. It was like a mini-reunion! 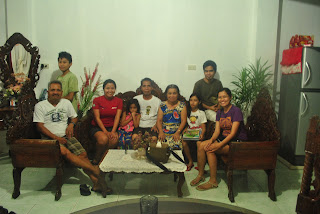 My cousin GA showed us around town. We passed by the historical landmark of the Siege of Catubig. According to Wikipedia, it "was a long and bloody engagement fought during the Philippine-American War, in which Filipino guerrillas launched a surprise attack against a detachment of U.S. infantry, and then forced them to abandon the town after a four-day siege. It began on April 15, 1900, and lasted four days before the survivors were rescued. The attack was very similar to the Balangiga Massacre farther south of Catubig a year later." 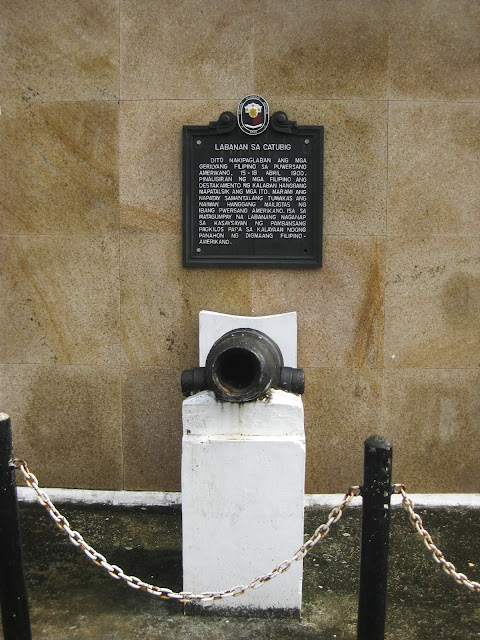 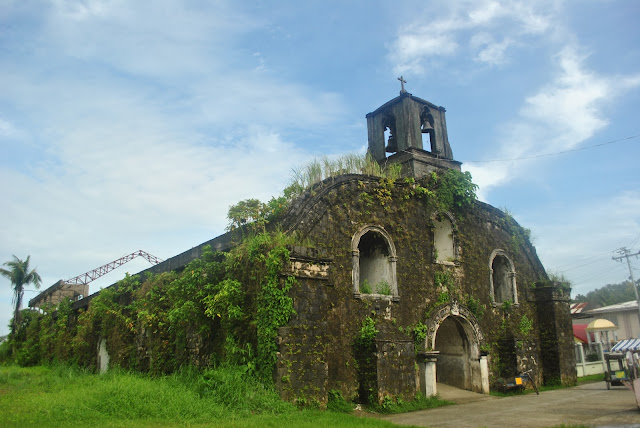 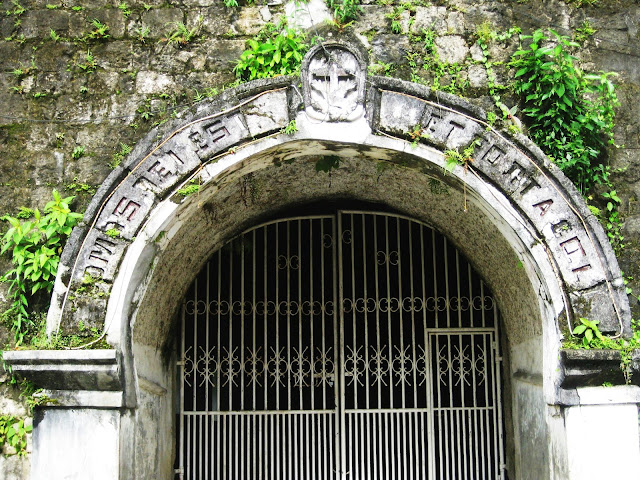 Close to the historic landmark is another old and almost forgotten heritage site in Catubig. This centuries-old church is one of the very few massive structures in this town. Its construction in 1790 was a product of forced labor by Catubig ancestors. As of present, weeds have already started to grow and climb its huge stone walls outside, but the interior is more modern after it had undergone series of repairs. I like this church the way it is now, rustic and old. Something we don't get to see often in many churches around the country.

We spent our last night in Catarman. We first stopped by the campus of University of Eastern Philippines (UEP). It is the largest university based on size and curriculum in Eastern Visayas. Interestingly, UEP is also home to a famous beach resort in Catarman, the UEP White Beach. It can be reached through a padyak from the main campus. We were supposed to pay an entrance fee of P15/adults but we got a free pass after we assured the guard that we wouldn't stay for more than 30 minutes. Inside the resort, we chanced upon some surfers seemingly enjoying the afternoon waves there. 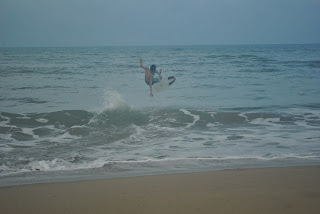 It was already getting dark when we left UEP. We hailed a trike to bring us to the poblacion. The driver dropped us off in front the Catarman Cathedral.  There were a handful of people inside the church when we arrived. 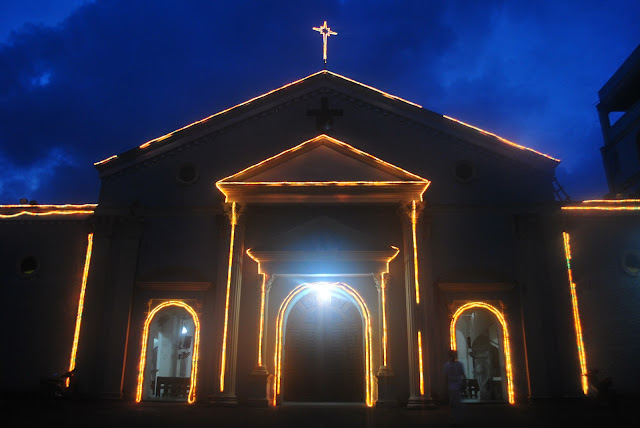 From the church, we scored the town for the best place to eat. I was surprised to see how vibrant the nightlife in Catarman compared to my hometown Virac in Catanduanes. We settled in a small resto called Bario Otso. Being that it was a Monday, we were even more surprised to have been serenaded by a live band while we were digging on their food. The food was good, though it took longer to be served. We capped the night with a cup of coffee at a local coffee shop. Oh, what a delightful night it was. 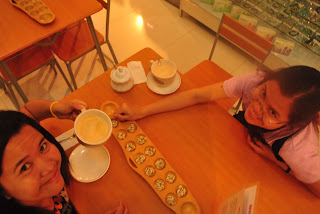 And just when we thought our Samar adventure was already over, we got a real scare the following morning when we were closed down at the check in counter for our flight back to Manila. We were almost 20 minutes late! Luckily, the Cebpac people were kind enough to allow us in. That was the thrilling end to our three-day road trip in Samar!

Yey! All's well that ends well! We made it home.

Posted by Che | BackpackingPilipinas at 11:30 AM