Save the Pine Trees, Save Baguio City!

At around 1 a.m. today, the news site Rappler broke the news via Twitter that they are getting reports from Baguio that retail giant SM started "earthballing" pine trees in Luneta Hill. It was followed by disheartening tweets like "first tree just fell," "3 trees down," and "10 trees cut down" shared by some netizens near the site.

So as I imagined the scene, it was covertly done early hours in the morning, with barely enough light to carry on the operation, backhoe and crane inside the compound, and massive walls were set up around the site. Clearly, SM is deliberately hiding the massacre from the public eye.

According to Rappler, 182 trees will be removed from Luneta Hill as part of the expansion plan of SM Development Corporation. According to the plan approved by the government, additional 76,000 square meters to the existing mall's floor area of 106,000 square meters is going to be converted to a parking lot and entertainment plaza.

While SM claims that the pine trees will be balled and not cut down, environmentalists are saying that it will have long-term harmful effects. Rappler noted that the area from which the trees will be moved is one of the few areas in the city where patches of trees remain.

This got me thinking why these "development" plans are being approved by the city government. If it's not too much that Baguio is already suffering from a lot of problems brought by urbanization, why add more structures that could possibly inflict deeper wound to the already ailing city?

According to reports from GMA 7 (see video below), the population size of Baguio tripled since 1990. The city that is designed for 30,000 people only is now inhabited by 300,000. And even water sheds and protected areas are already being converted to residential and commercial areas.

These sad figures and grim stories are really painful to accept.

I've been to Baguio many times already and it remains to be one of my favorite destinations. It is a lovely place that has a lot to offer to visitors --  the perfect temperature, the rich culture of the mountain people, many scenic spots, and of course the comfort of the pine trees.

But from the first time I headed there up to my visit late last year, I have witnessed the many changes that seemed to have evolved with the people there. The massive mall that now sits on top of a hill, which was once home to hundreds of pine trees, have completely changed the landscape of this city. I see it as a totally misplaced object amidst the greens and beauty around it.

Finally, this issue is best argued by a quote I got from Twitter: we go to Baguio to commune with trees, not to worship concrete. (@theofrenz) 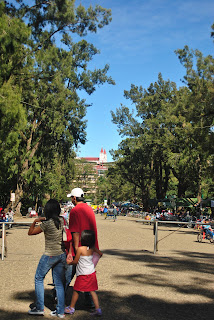 I think it's hightime to pressure the government to act!

Baguio has to be protected!

Baguio is not for the privileged few only, it's not for sale! Boycott SM!

Save the Pine Trees, Save Baguio City!

Posted by Che | BackpackingPilipinas at 9:58 AM