My unusual journey in Sagada

I knew the moment we unloaded our bags from our bus that I’d be up to a great adventure in Sagada. Actually before we arrived there, we had already enjoyed the scenic Mt. Province - indeed, it is a province with a lot of mountains! The deep ravines, the majestic stretch of rice terraces, the simple structure of uphill houses, the long and winding Chico River, the cotton-cloudy sky kissing the mountains, the moist of fogs, the road’s delicate curves and ultimately the dominance of green. I later on realized that these were just a prelude to what we were up to in Sagada.

My travel mates included my sister Cha, my college classmates Ems and Precel, my new-found friend ate Melody and some other 60-strong adventurous urban folks (trip made possible by Travel Factor). It was a large group of tourists expecting to find some fun for the long weekend. We traveled more than 13 hours to get to Sagada.

Based on what I learned, spelunking is a cave tour or trek while caving means cave studying or exploration. Honestly, I thought that all caving adventures are called caving.


When our guides told us that the whole process will be difficult, my raging adventurous spirit did not bother to listen. They gave us two different options, the easy and the difficult level. Cha, Precel and I chose the difficult level which means we will have to brave the 5-hour intense caving experience. We were repeatedly reminded that once inside, there is no turning back (just like crossing the Rubicon River).

We started at around 3 p.m. Everyone was still on the picture-taking mode since there are hanging coffins at the entrance of the Lumiang cave. Then, it was a different story when we got inside. The only source of light are the petromax carried by our guides. We had to use almost all body movements just to get to another place. One false move, may pagkakalagyan ka. We  also had to fight the freezing pools inside. Our lives practically depended on the hands of our guides. I could not count how many “thank you God” and “t*** I**” I have uttered during the entire course. Despite this unexpected level of difficulty, we have achieved so much just by enjoying the wonderful sites we saw inside the caves. Really a gift of nature!

We reached the end of the Sumaguing cave almost 10 p.m., tired and half-frozen! I survived spelunking inside Lumiang and Sumaguing caves!

One thing very notable in Sagada is its zero-fast food chain policy. Thank God I got a break from the big golden arc and the smiling bee.

Sagada offers various gourmets ranging from Western, Asian to Filipino dishes. I especially love the sinful yogurt at the Yoghurt House. The “ate” who cooked our meals in Alibama was also great. I liked our breakfast at the Bana Cafe. My only regret was not being able to taste the famous lemon pie at the lemon Pie House(sold out). Luckily, we were able to taste a home-made lemon pie available near the place we stayed.

Sagada has no trikes. Almost all tours have to be done by trekking or by some guided jeepney rides. On our second day, we woke up around 4:30 am so we can get a good sunrise view at the Kiltepan Tower. Sadly, due to overcast sky we were not able to see even a streak of light coming from the sun. Nonetheless, the view below us was still amazing.

After our breakfast, we readied for a trek to Sagada Terraces and Bomod-ok falls. After the caving experience we had the other night, we thought the trek would be “sisiw.” Unfortunately, we were all wrong. The up and down walk in the terraces was very strenuous. But it’s all worth it when we reached the very imposing view of the Bomod-ok Falls. What a huge huge cascade we saw there! 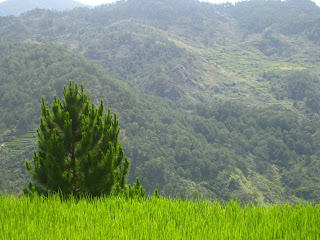 Just before sunset, we reached Lake Danum. This time we got a nice sunset. The tour organizers prepared a cultural presentation for all tourists there. The bonfire was our only source of heat. Despite the crisp and cold temperature, everyone enjoyed the night.

On our last day, we had a chance to go around Sagada. We went to St. Mary’s Episcopal church, Calvary Hills , Echo Valley and Hanging Coffins. While on the walking tour, our guide, Kuya Erwin, discussed with us some cultural and historical values of the places we visited. There I learned how Sagadians compromised with white missionaries some of their old traditions (ex. how to bury their dead and how they got educated).

Sagada sits at the highest of the Mt. Province. It presents to be multi-faceted. It has attracted lots of artists, activists, anthropologists, urban yuppies and adventure seekers, spiritualist and hash smokers.

One thing notable about Sagada is its people’s good command of the English language. Like kuya Erwin, he speaks really good English. He said that many elderly Sagadians also speak impeccable English than Tagalog. The reason being is that their primary education came from American missionaries.

I also learned that some Sagadians put more trust to white tourists that those coming from the lowland. It is because they seem to have received better treatment from the whites. They feel like many Filipinos have certain prejudice against mountain people, especially Igorots. Kuya Erwin mentioned that Carlos P. Romulo once said “Igorots are not Filipinos.” I have yet verified the validity of this statement but I guess these words have created quite an impression on them on how some of us treat them. 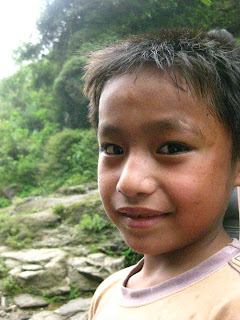 While on our trip back to Manila, we were all reminiscing the experiences we had in that majestic place. One thing I'm sure of, I shall return. 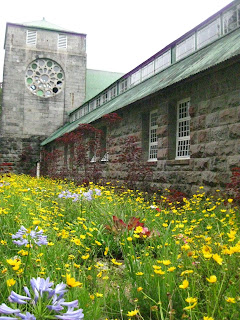 Posted by Che | BackpackingPilipinas at 10:55 AM